Trending Now
You are at:Home»Government»Law Enforcement»Police Dogs Found Dead In The Back Of A Police Vehicle In Florida

Sadly, news has surfaced that two police dogs found dead in the back of a police vehicle may have died from heat exposure. The Hialeah Police Department has lost two loyal police dogs. An investigation concerning how and why they died is currently underway.

According to reports, department police found the two dogs from the K-9 Unit unresponsive after being locked in the department marked SUV parked in the driveway of their handler’s home.  The K-9 handler is said to be officer Nelson Enriquez.

“We received a call of two dead K-9s. Upon responding to the scene, we made contact with a Hialeah Police officer,” Davie Police Sgt. Pablo Castaneda told news station WSVN.

The K-9 officer, Nelson Enriquez, has been an officer for 13 years and has been assigned the K-9 duty for 7 years. The two K-9s were, “Jimmy,” a 7year-old bloodhound and “Hector,” a 4 year-old Belgian Malinois. 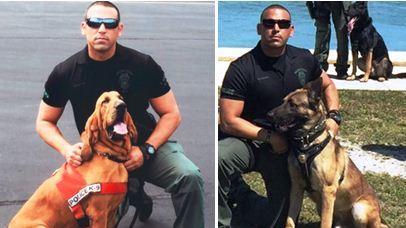 It is reported that the officer went outside in the evening, hours after his shift ended.  It is at this time we believe the dogs were first found unresponsive.

“The Hialeah Police Department is extremely saddened by this unfortunate occurrence and every effort will be made to determine the cause of this terrible tragedy, which claimed the lives of two very beloved members of our Hialeah policy family,” Carl Zogby with the Hialeah Police Department said, according to the local TV station. “This is still an open and active investigation and we must wait for the outcome from the Davie police and the Broward State Attorney’s office.”

Both police departments have been quiet about any speculation as to the cause of death for the two K-9s. It is reported that the dogs had spent all day in the hot car and that might be the cause of death. The weather in Davie has been in the 80s all week though the temperatures inside the police vehicle were assumed to be well over 100 degrees.