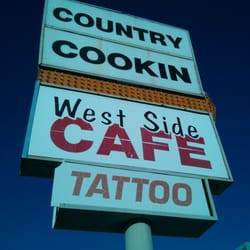 Shaun and Debbie Riddle are regulars at the West Side Café in Fort Worth, Texas, where Kayla Lane is a waitress. Kayla recognized them immediately as the couple who recently had a baby girl. When she noticed the baby wasn’t with them, she inquired about the child. The Riddles went suddenly silent, and then explained to Kayla that their nine-week-old baby girl, Glory, had died in her sleep a few weeks before.

This heart-wrenching news prompted Kayla Lane to do something out of the ordinary. Her empathy toward the couple made her want to do something for them. KTVT-TV in Fort Worth reported that when the waitress brought the bill to the couple, she had written a message on it for them. The bill read, “Your ticket has been paid for. We are terribly sorry for your loss. God bless. – the West Side.”

The message, KTVT-TV discovered, was not the truth. The West Side Café had not paid the bill. It was actually Kayla who paid for the couple’s meal that day; and although they tried to pay anyway, she told them no.

Debbie Riddle was so overwhelmed with Kayla’s kindness, she posted a Facebook message that told of the kindness, asking that the waitress and the restaurant deserved to be noted for their actions. Mrs. Riddle said, “When it was time for us to pay our bill, Kayla brings over our receipt. She didn’t even want us to tip her because she said the company took care of her tip as well.” “We hear so much negativity on the news and that is why I felt led to share this story in hopes that Kayla and this restaurant will get some good recognition.”

Kayla has actually done this on past occasions for firefighters and military personnel, she told the TV reporter. She said “I feel privileged that I’m able to do it.” She said it gave her much joy to be able to make people’s day a little brighter when she can.

Shaun and Debbie Riddle told WFAA-TV that she and her husband have been overjoyed by the response. “I have so much more I could add, but can’t find the words to truly express what a profound impact this ‘random act of kindness’ has had on our family, Kayla’s family, and hundreds if not thousands more people worldwide”, Debbie said. “Loss is an unexplainable tragedy, but this is proof that one person can make a difference.”

This time, this one person is Kayla Lane of The West Side Café in Fort Worth, Texas. Stop in. You know you’ll be welcome, and who knows, your day might be brighter after your visit!